If you have ever been jailed or locked up by the police, perhaps you can appreciate how different things must have looked for John behind those prison walls. The denial of freedom and confinement to a limited space can quash one’s spirit. For, if ever the phrase ‘free spirit’ applied to anyone, it was John. As we mentioned last week, he lived in the dessert, dressed outrageously and said what he wanted to say without holding back, until Herod Antipas locked him up.

We don’t know much about John, so we don’t know if he was able to keep his ego in check when multitudes gathered from Jerusalem and the surrounding villages to hear him preach. Perhaps it is safe to say that John felt a kind of excitement with so much religious energy in the air. There was some expectation at the beginning of John’s ministry that something was about to happen, and John’s mission was to prepare the people because someone was coming whose sandals he was not worthy to untie.

John was sure that when this powerful person arrived, things would change. He expected the righteous to be vindicated and the evil and corrupt to be confronted. He therefore could not understand why he was in prison for speaking the truth while the Messiah who sets people free was around and had not sent the cavalries to rescue him. Was he frustrated, angry, bitter? We don’t know; but I am almost certain he was very disappointed! John had once made the multitude tremble with his words. Now he had to pass through his disciples to ask Jesus a question; and his question was this: Are you the one who is to come or are we to wait for another?

Whatever had happened to him while in jail, he hadn’t lost his faith in God although he wasn’t quite so sure now.  Jesus tells us that John was the best humanity had ever produced, so if he had doubts, they were not the doubts of a scoffer. He had been willing to accept Jesus as the one who was coming, but he had some questions all along. He didn’t understand why, for example, the one who would judge the world needed to be baptized for the cleansing of sin? But something else bothered him: Jesus and his disciples’ relaxed attitude towards life. Could it be, Lord forbid, John must have thought, that Jesus was indeed the one, but lacked the discipline to follow through?

Now, as John languished in prison, perhaps suspecting that he would never walk out free; those doubts really began to matter. And given the circumstances, can we in all honesty blame him for doubting?

What about us? Where do we find ourselves this third Sunday in Advent? Do any questions or doubts spring to mind to spoil the festive mood? Even if we can enter into the spirit of the season, does some of the singing and merry-making simply hide our anxiety and internal conflict? John’s question about whether Jesus was really the one who was to come may lead us to ask some questions of our own. E.g. what difference has Jesus coming made to the world? If the Messiah has come, why do so many of us find ourselves in one kind of prison or another? We could all name some of those prisons. For John the Baptist, the prison was real, and that is still true for many people. Prisons in most countries of the world are practically full.

The reasons for this overcrowding are complicated, but include: criminality, drugs, poor education, childhood abuse, loss of values, poverty, etc. Those in prison have committed a crime, and perhaps deserve their punishment, but they also reflect the true nature of our society’s brokenness. As a society we will never experience the true joys of Christmas until we’ve owned up to these problems and started to sort them. John’s incarceration was political and certainly we can see some joy-killers in politics. The political parties in this country are unable to work together for the good of the country. Each party seems to spend all its time and energy attacking and discrediting the policies of the other party. Meanwhile, the NHS struggles like a sickly patient in need of treatment, the economy has barely started to recover from a recession caused by greed and corruption, the welfare system is almost coming to a grinding halt and the management of immigration is in shambles.

Our personal problems this Christmas may not be as serious as those the country faces, but maybe we are unwell and the frustration depresses us: at Christmas time, not having a good health really stinks. Maybe we are losing a fight to an addiction that we can’t break free from; maybe the memory of a recently departed one hangs over us and we can’t find any peace. Or our prison may be something different which we feel no one would understand and so we keep it to ourselves and are left feeling isolated and lonely. If we look at some of the situations that have kept us prisoners, we may ask questions just like John did. If Jesus is the one, why are things not different? Why hasn’t God sorted out the mess in this world, including the mess in our own lives?

So; where do we stand this Advent season? Are we as convinced as ever that Jesus is the Messiah, or are we covering up our doubts with a Christmas cheer? Well, we are not alone: John has been there before us and Jesus’ answer to John is our answer as well. Where we see the power of healing and the wisdom of true teaching, we see the difference the coming of the Messiah has made.  Questions and doubts are fine; they are the catalysts needed for the growth of our faith, so doubt if you will, but learn like John to move from doubt to faith. 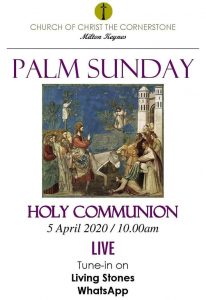