The Church of Christ the Cornerstone was the first ecumenical city centre church in the United Kingdom. There are covenants which bring together the Church of England, the Baptist Union, the Methodist Church, the Roman Catholic Church and the United Reformed Church in a partnership which was seen as an important step forward for the Ecumenical movement in the UK.

The Local Ecumenical Partnership for the City Centre was set up in late September 1979 with a service of dedication in Middleton Hall (in the centre of the town’s indoor shopping centre). The present congregation met for the first time on 6 April 1980 at Centrecom in North Row and moved to the ‘Church-in-the-library’ at Easter 1981. The move to the new church took place on 12 January 1992. 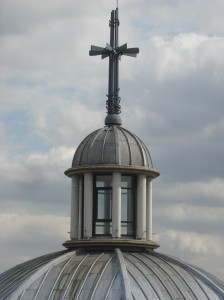 The church is 101 feet high (to the top of the lantern) while the cross rises a further 18 feet.

The first turf on the site of the new building was cut by Lord Campbell of Eskan, the first Chairman of Milton Keynes Development Corporation on 31 May 1990. Building work began on 4 June and the church was handed over on 20 December 1991.

The architect for the church was Iain Smith of Planning Design Development Ltd, a local Milton Keynes firm. The architect of the flanking office blocks, however, were Conran Roche. The contract for the overall development of Church Square was won by Beazer Developments Ltd. The church itself was built by Marriotts of Rushden, Northants.

The Cross on top of the lantern is the work of artist/metalsmith Alan Evans of Stroud in Gloucestershire and was placed in position during a special service on Good Friday 29 March 1991 that was attended by over one thousand people.

The covenant which binds together the five denominations reads as follows:

Believing that the unity of the church is the will of God, we, the members and ministers of the congregation at the Church of Christ the Cornerstone hereby covenant upon the foundation of the recognition that we have one Lord, one Faith, one Baptism; for, we share a Gospel which effects reconciliation between God and humankind and between nations and peoples.

Travelling as Pilgrims on a journey that has already started and which will lead we know not where, we are pleased to place our trust in God, in whose hands the future lies, and to be led forward by Him.

In order to proclaim the gospel by common witness and service in the community and the world, and in obedience to God’s call, through the power of the Holy Spirit, we therefore joyfully covenant with each other:

to the greater glory of God.

We also commit ourselves: to enact and fulfil such matters as our congregations shall determine by common consensus, which are set out in the Supplement to this Covenant and are to be reviewed prior to an annual act of worship, at which this Covenant will be renewed.

Signed by representatives of the local churches on 16 September 1990